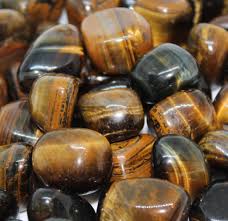 Firstly lets talk about the things associated with tigers eye. When it comes to deities this crystal is associated with Ra, Sekhmet, and Durga. It is associated with the sacral and navel chakra. It has ties to both the element of fire and earth. It is connected to the sun which makes this card really great during any summer sabbats or just to connect with the sun or summer as a whole.

Tigers eye has many uses. One of these uses to bring good fortune and luck into your life. It helps bring in a steady flow of income. If you are starting up your own business, or are in the business field in general, this is a great stone for you due to it’s connections with good fortune and money.

Tigers eye is great for encouraging you to step out of your comfort zone and grow as an individual. It can help you grow artistically, creatively, and with your physical abilities. It can also encourage you to try new things. If you need some personal support for staying determined and to overcome your fears during exams, competitions, any public speaking, selling your goods, or anything of the like, this is the stone for you.

If you are going someone new and need some help with your insight and perception then you can wear this stone to help you. It helps keep your mind and eyes sharp,I and helps you stay detail focused. If you are going through a crisis this is a great crystal to have on hand as it can help you feel more confident about your decision making.

Tiger’s eye is a fantastic crystal for self improvement. It helps with your will power, emotional stability, and your energy levels. It can help you with weight loss as it helps kick out the cravings you have for bad food and can help you stay away from binge eating. It can also be a great support if you’re trying to quite smoking, or any other drugs or alcohol. If you struggle with anxiety over feelings of isolation or inadequacy then tigers eye can help you as well.

Tiger’s eye is also great for balance. It can help ease tensions in family struggles or in any relationship where difference in opinion seems to be sparking conflict. This crystal brings harmony to those around it who have different viewpoints, religious beliefs, or just different approaches to life as a whole.

When it comes to Magickal workings tigers eye is great for any divination readings that have to do with money making endeavors. It is also great to protect you from psychic attacks. You can also use it to ground yourself before doing any magickal or ritual workings.

Thanks for checking out today’s post! What do you use tigers eye for? Let me know in the comments along with any other thoughts or questions you have for me. Make sure you follow me here and on twitter so you get notifications when I post and upload videos you youtube. Until next time, Blessed Be! 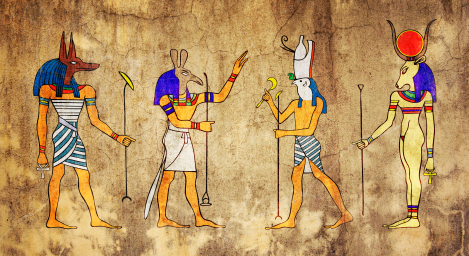 Well I suppose we are due for another post about a pantheon and I thought it would be fun if we did Egyptian. As I’ve said before though, the Egyptian pantheon isn’t the one I follow so I am less knowledgeable about it, therefore if you think I missed an important God or Goddess please let me know and I can certainly add it!

Isis: the mother goddess of Egypt. She is thought of as the mother of nature and all things magical.  She carries an ankh in her hand and is said to also be the Goddess of children and ritual.

Ma’at: the goddess is thought of as the ruler and aid of justice and truth. She brings balance and order in both spiritual and mundane realms. She determines whether a soul is worthy to go to an afterlife.

Sekhmet: the goddess of divine retribution, vengeance, conquest, and war. She is pictured as a lion and thought to be the fiercest hunter known to the Egyptians. Something interesting I learned about her is even though she is a goddess, which is often associated with the moon, she is a solar deity. After a battle was won they would hold festivals to her so the destruction would end.

Bast: She is thought of as a cat goddess. She is often shown holding the ankh (representing the breath of life) or the papyrus wand (representing Lower Egypt). She occasionally bears a was-scepter (signifying strength) and is often accompanied by a litter of kittens. Cats are sacred to her and one that does harm to a cat is considered to have done a crime against her and will be unlucky. She is the goddess of protection and evidently, cats.

Anubis: guardian and protector of the dead. God of the underworld (originally), embalming process, and funeral rites. He led the innocent to a heavenly existence and the guilty to Ammit. Later on Osiris was the King of the Underworld in the Ennead and he was more popular (and powerful) than Anubis. So Anubis was relegated to a god of mummification. He became the patron of lost souls, including orphans, and the patron of the funeral rites. Anubis was credited with a high level of anatomical knowledge as a result of embalming, and so he was the patron of anaesthesiology and his priests were apparently skilled herbal healers.

Horus: He was considered to be a celestial falcon. He is a god of war and a sky god. He was the protector and patron of the pharaoh. The Pharaoh was often considered to be the embodiment of Horus while alive (and Osiris once he was deceased). Horus was the embodiment of order and represented the daytime sky. Horus was also the patron of young men and was often described as the perfect example of the dutiful son who grows up to become a just man.

Ra: He is the sun god of Egypt. He is the king of the Gods and thus the patron of the pharaoh and one of the central gods of the Egyptian pantheon. He is also thought to be the creator of everything.

Thoth: As the power of his cult grew, the myth was rewritten to make Thoth the creator god. According to this variant, Thoth (in the form of an ibis, one of his sacred animals) laid an egg from which Ra (Atum, Nefertum, or khepri) was born. Thoth was also thought to have invented writing, medicine, magic, and the Egyptian´s civil and religious practices. He was even credited with the invention of music. Thoth was the patron of scribes and of the written word. He was scribe of the underworld who recorded the verdict on the deceased in the hall of Ma´at and was given the epithets. He was given the grand title, the “Author of Every Work on Every Branch of Knowledge, Both Human and Divine”. As Thoth was associated with writing and with the moon it is perhaps unsurprising that he was also linked to the creation of the calendar. As his association with the moon waned, he developed into a god of wisdom, magic and the measurement of time.

Do you follow the Egyptian Pantheon, if so, who do you worship? Let me know along with any other thoughts or questions in the comments below. Also, make sure to follow me here and on on twitter so you get notification when I post. Thanks for reading and until next time, Merry Meet and Blessed Be!